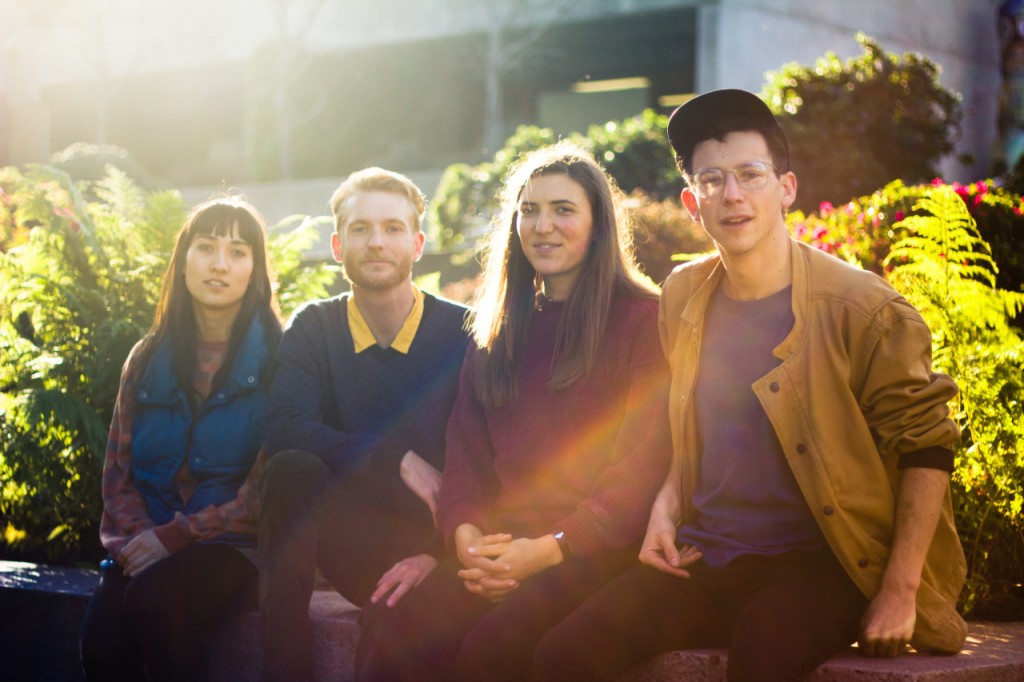 Having released a slew of free singles and a couple of EPs for good measure, last month the release of their wonderful debut LP, Pathology; an utterly irresistible offering of infectious, sun-drenched, tropical indie-pop, soaked with latin influences. A record flush with pleasure, from the lively beats of songs like ‘Skeletons’ and ‘Downright’ get your body in the groove to the big hooks and guitar lines of ‘Mtn Tune’, or the rich harmonies of ‘Say You Will’. Performing in English, Spanish and Portuguese, it is lyrically dynamic too and they are equally adept with the personal to the political. A simply joyful, uplifting and marvellous record, and without question, a perfect companion for summer.

In support of the new record, Trails And Ways have been touring across North America and they played The Media Club in Vancouver on Saturday last. I caught up with Trails And Ways’ Keith Brower Brown before the show to chat about the new album, touring and all things Trails And Ways.

A big thanks to the Trails And Ways gang for taking time out for this and, for a full list of the band’s tour dates, check here. Check the album below too!

Tell us a little about the band. How did you all meet? And how did Trails and Ways come about?

Keith: We met through playing music and living in cooperatives in Berkeley. The band started by working on some songs that Emma and I wrote when we lived in Spain & Brazil, and then we started playing warehouses and dives and house shows around the Bay Area, and then started sending a few tracks to blogs, and it all started snowballing.

You recently released your excellent debut LP, ‘Pathology’. Did the fact you quit the day jobs assist the creative process of add more pressure? Where there any bumps in the road along the way? What are your personal favorites from the album?

Keith: Quitting day jobs was a crazy gift but yeah, totally raised the pressure we put on ourselves. Some of us had a kind of utopian vision of super consensus-based collective process for how we’d write and produce the record together, and that always makes the road curvier, but I’m happy where it brought us. “Heavy Sleeper”, “Jacaranda” & “Vines” are my personal favorites from the record.

Amid the joyful, uplifting sun drenched sounds, there’s a blend of personal tales and some subtle political undercurrents, that are honest and never preachy. Is this something striven for collectively and is there a compulsion to use the music as a force for good, in airing political frustrations and grievances? On a lighter note, what else helped inform and shape the record?

Keith: I’m glad the more explicit politics felt honest to you. It would feel dishonest to me to try to wipe a song clean of the context of our troubled world, and how that trouble makes me feel. I really want to make music that creates more of a space for compassion, for people to give a f’ about each other. In other inspirations, a mix of hiking surfing running dancing biking swimming carpentry is a big part of our lives at home. I think that made us want to make this record really physical, we want to make people want to move.

What’s it really like touring? And what’s been the most memorable, fun or craziest moment so far?

Keith: On tour you’re always in strange unfamiliar places but you figure out habits of passing quickly and purposefully through it. And you’re mind-altered primarily by sleep deprivation and sometimes adrenaline. And you get into sudden very real conversations with lots of generous strangers and cool people who come to your shows. Every week or so we get a day off and we’ve got some super good outdoors time in; swimming rapids on Barton Creek in Texas, a hike in the Washington Cascasdes, a deep lake in the Black Hills in South Dakota.

Keith: We’re playing almost all (and sometimes all) of Trilingual and Pathology, and I think we’re playing groovier and more driving than we ever have. Our friend Gonzalo (who directed our Jacaranda music video) put together a visual projection show that feeds off our live instruments, and I think it’s very cool.

When the band isn’t making great music, what do the members of Trails and Ways find themselves doing to occupy their time?

Keith: Aside from the fore mentioned swimming surfing hiking etc, at home we do a good bit of cooking + going to shows + gardening + reading feminist sci-fi + playing other music + drawing + hanging with dogs. I coordinate a project called Float Map, an online map of the local/personal impacts of climate chaos–we just launched and I’m really proud of it

Aside from the tour, what does the not so distant future hold for Trails & Ways?

Keith: We have a new music video on the way, featuring our bassist Emma in the coastal rangeland she grew up in. A few rad producer friends are working on remixes of our new songs.