This weekend sees the 5th Castlepalooza Festival roll into Charleville Castle in Tullamore Co. Offaly and I’m making my first appearance this year thanks to the fine fellas at Goldenplec. It seems a characteristic of the smaller Irish festivals is their willingness to showcase  homegrown acts and Castlepalooza is no different with Fionn Regan, Tu-Ki, Band on an Island, The Lowly Knights, The Cast of Cheers & Adebisi Shank being of personal interest to me. You can check the full line-up including Mercury Rev here – suggestions always welcome.

I have to say I’m relishing the prospect of a more relaxed atmosphere with just 3,000 punters in the grounds of a medieval castle, nice if you’ve got it?

The blog will be very, very quite until Monday (cue tumble weed) so here’s a few choice tunes from some acts I’m hoping to catch.

The Cast of Cheers – Derp

END_OF_DOCUMENT_TOKEN_TO_BE_REPLACED

Holy Ghost! have been in fine form this year with a number of quality remixes and tunes floating around the blogosphere (ughhhh!), this has led many to whisper these guys could be heirs to the soon the be vacated throne of LCD Soundsystem.

With the impending release of 4-track Static On The Wire EP on August 23rd it’s too early for brash statements of this sort but their electro/disco dance music is hugely infectious if a little too 80’s at times. To coincide with the release they have released a video for ‘I Know, I Hear’ which features Caroline Polachek of Chairlift.

A definite talent to keep an eye on plus one of the aforementioned excellent remixes for you all to enjoy. 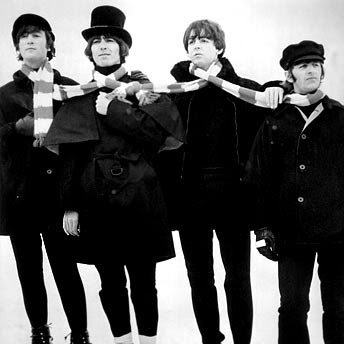 I’m not normally partial to classic music being remixed but things can change, right?

Parisian whizz kid Allure is the exception, this remix of The Beatles classic ‘And I Love Her’ is fast becoming one of my favourite tunes of the summer. It’s smooth, sharp, elegant, lively and quintessentially french, not a handball in sight. 😉

Serious kudos to dipped in dollars for the original post, without which I may never have discovered this little beauty.

Mp3: The Beatles – And I Love Her (Allure Remix)

It’s not often a mysterious release arrives from a band so elusive it’s near impossible to find anything about them online. It seems everyone’s struggling to discover more about Guards, all that’s known so far is they are based in NY and buzz band Cults bluntly announced via twitter they featured on this new debut EP. It might as well have dropped straight from the sky.

This kind of inscrutable nature intrigues me (it’s probably designed to do so). It turns out if you didn’t already know, not knowing anything about a band doesn’t inhibit the enjoyment of music especially when it’s this good, memorable 60’s inspired, breezy, lo-fi garage rock at it’s very best.

The EP features collaborations with Caroline Polachek of Chairlift as well as Cults. It’s solid as a rock the whole way through but don’t just take my word for it, download it for FREE from their bandcamp page – here’s two very good reasons why you should below.

Mp3: Guards – Resolution of One

There’s an awful lot expected of Mystery Jets following the flawless Twenty One in 2008 but it’s always going to an arduous task to surpass such a great album, isn’t it? Unfortunately Serotonin doesn’t live up to this expectation, failing to match their last album. It’s not a bad effort by any stretch of the imagination but you can’t help feeling a little bit short change because they can do better.

The major problem is the schism of standards between songs leading to a fairly disjointed listen, the rather pedestrian ‘Too Late to Talk’ and ‘The Girl is Gone’ lack the panache, eccentricity and peculiarity which made them stand out from a largely bland ‘indie’ scene in the first place. Their return heralds a more majestic, poppy and polished approach which avoids risks at all costs, remarkably abandoning the very thing that earmarked them in the first place.

There is plenty here to keep fans happy; the wonderful whistle-along ‘Flash A Hungry Smile’, memorable ‘Lady Grey’ and the shimmering ‘Dreaming of Another World’ are definite high points but it  just compounds what we knew already, they can do better than this.

This one from Toddla T was featured a while back after it was unleashed onto the airwaves by Zane Lowe. The 25-year-old recently signed to Ninja Tune and hopefully this is the first on a long and fruitful relationship. You can’t help but think they didn’t splash out on the video but hey, the single is a fantastically up tempo and lively blend of summer vibes.

If you haven’t already, make sure and check out last years Skanky Skanky and his own Fabriclive 47 – effortlessly shuffling through genres with help from the likes of Roots Manuva to deliver outstanding electro dancehall riddims. Hopefully there isn’t too long a wait for his second album.

There’s a lot expected of French electro indie 80’s guitar riff enthusiasts Jamaica and rightfully so, signed to the uber cool Kitsuné label (Two Door Cinema Club) and getting Justice’s Xavier de Rosnay and Peter Franco (Daft Punk soundman) on board will do that. With an album release still a while off (23 August) they’ve continued to deliver some fuzzy indie-pop goodness with a new video for ‘Short and Entertaining’.

The impressive and surprising nature of Kele’s set at Oxegen has been the worst kept secret in the world. He seems to have given him a new lease of life, more at home, relaxed and enjoying things without the mantel of Bloc Party hanging over his head. These very same sentiments can be felt throughout his debut album The Boxer, a fantastic blend of disco, electro and dance.

‘Everything You Wanted’ is the latest single to be released from the album and just as it seemed impossible to make it bouncier or more uptempo it’s got the remix treatment from sage RAC (Remix Artist Collective). It has a rather distinct sound, like it’s been filtered through 80’s all with jaunty beats and synthy jabs – RAC have done it again.

Just so you don’t think this is a flash in the pan from RAC check out the slightly older Black Ghosts w/ Damon Albarn remix – Superb!

Kele – Everything You Wanted (RAC Mix)

The Count & Sinden have enlisted the help of Will and Kai from Mystery Jets for their latest single ‘After Dark’, the pair obviously didn’t get enough ’80’s nostalgia with ‘Two Doors Down’ (Check the video). The Count & Sinden (Herve & Sinden) have been knocking together club friendly tunes over the past few years and this one seems set to keep floors groovin’ as the end of the summer draws near.

The album Mega Mega Mega will hit the shops 23 August – A pretty fresh sounding remix has appeared already, the judgement is reserved for your good selves.

This super re-edit of the classic Beastie Boys hip-hop masterpiece ‘Sabotage’ from Alex Metric was featured here a few weeks back but now there’s an excellent video from Comix VJs to go along with it. Enjoy!