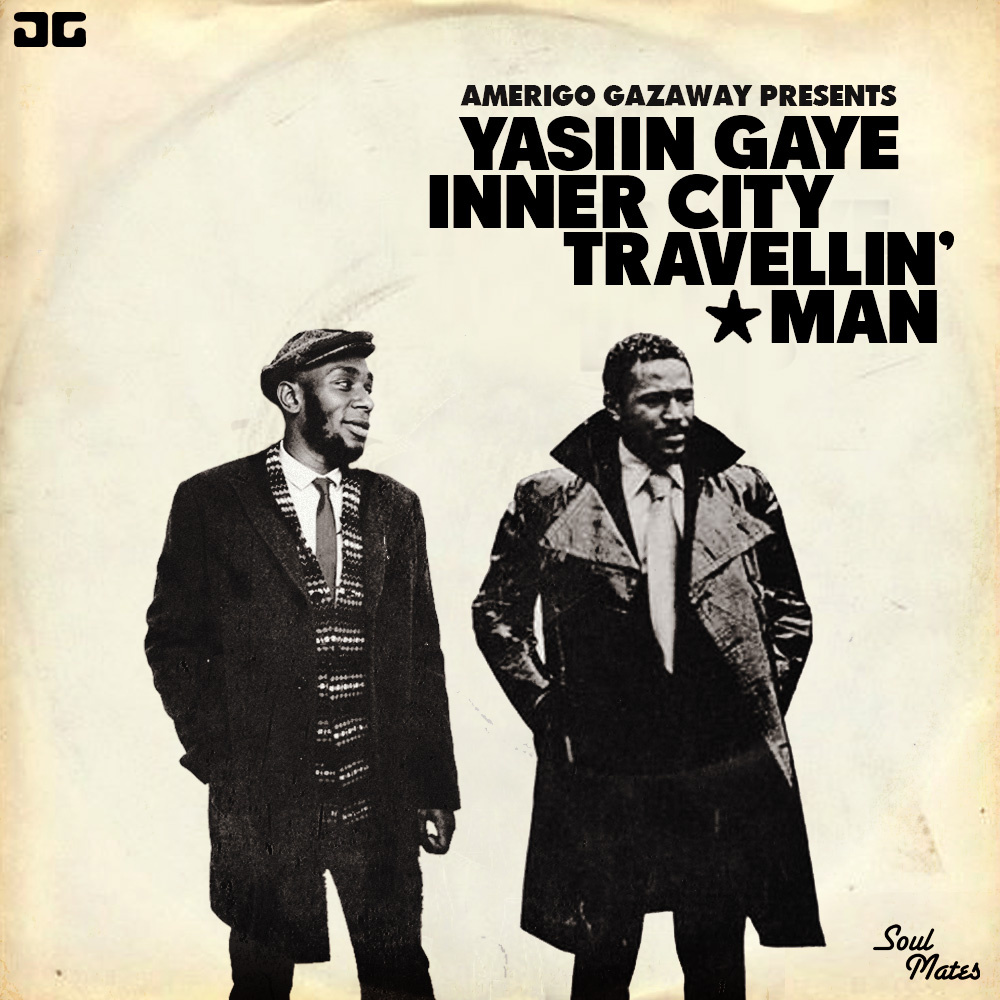 Yasiin Gaye is the latest project of Amerigo Gazaway, formerly operating under the Gummy Soul guise and the brains behind the Fela Soul mixtape/mashup albums, and one of an elite few who’s done mash ups justice.

Gazaway’s latest project unites rapper Yasiin Bey (Mos Def) and soul legend Marvin Gaye for a dream collaboration. Carefully weaving Bey’s dense raps and Gaye’s soulful vocals over his new arrangements, he’s aiming for a quality far closer to Gaye’s famous duets than that of a mere ‘mashup’ album. ‘Inner City Travellin’ Man’ is a hugely impressive prelude; taking one part Yasiin Bey in the form of ‘Travellin’ Man’ and one part Marvin Gaye in the form of ‘Innercity Blues’, put them together and you’ve got ‘Inner City Travellin’ Man’. This is apparently the first installment of a whole new series called ‘Soul Mates’ and suggests great things for Yasiin Gaye and the broader series on a whole.

Yasiin Gaye is released on February 25th. You can stream or download ‘Inner City Travellin’ Man’ below:

Mash-ups have become increasingly popular over the past decade or so, however, sifting through the volumes of mediocrity and downright awful mash-ups can be an arduous task to say the least.

One man you can consistently bank on to deliver something of real class and quality is Max Tannone. The NYC producer is the man behind Ghostfunk, Mos Dub, Dub Kweli and Jaydiohead, and his brand new remix project Mic Check 1234! is yet another supremely brilliant piece of work. This time he’s decided to pit some of his favorite emcees’ most socio-political material with some of the best punk bands ever. And why not? Afterall, great hip-hop and punk have a lot in common; both want to affect change, to rebel against the status quo, or to simply just get up and move.

Yet another stunning album from Max Tannone and like the old adage says, some times the best things in life are free. You can spin some choice cuts below or check here for more info or download the whole thing for free.

Separating the wheat from the chaff in the world of mashups can be a tough task, but every now and again a real gem springs itself on us.

Listen to Fela Soul below or you can download the album for FREE from Bandcamp.

Sifting through the tripe in the world of mashups is tough work but when you find a special one, it’s worth it.

Minneapolis duo Doomtree (aka Cecil Otter and Swiss Andy) have decided to embrace the art of cut & paste by pitting the post-rock noisemakers, Fugazi, with the works of Wu-Tang Clan.

Aptly titled Wugazi, 13 Chambers, the duo set out a thirteen song collision course of extraordinary proportions, which really shouldn’t work but it does, oh how it does!

You can grab it for FREE from Wugazi.com. Here’s three reasons why below!

New York producer Max Tannone, the brains behind Mos Dub, Dub Kweli and Jaydiohead projects is back, with a genius new mash-up record.

This guy needs no introduction, his previous work speaks for itself. The new project is called Ghostfunk and on this occasion Tannone pairs Wu-Tang member Ghostface Killah, with vintage African funk, high-life, and psychedelic rock music. A daunting to task to most but as we’ve seen from his previous work, Max Tannone can pull it off

Here’s three reasons to grab the entire album for FREE from his website.

Building on that inclusion they have dropped a new reworked mash-up of their track ‘Crave You (Feat. Giselle)’. It sees Friendly Fires & Aeroplane being added to the mix to create wonderfully upbeat electro-pop, who’s head nodding cheeriness knows no bounds. Also check the equally great c90s remix too, all seven and a half minutes of it.

Both of these have been getting repeat treatment around these parts, you can too if you grab ’em below.

Over Christmas the little known DJ Wick-It the Instigator (aka Andrew Owsley) introduced us to The Brothers of Chico Dusty. The project pits together tracks from the Black Keys’ Brothers album and Big Boi’s Lucious Left Foot: The Son of Chico Dusty.

The end results are really quite impressive, feels remarkably organic with nothing sounding out of place. Let this be DJ Wick-It’s formal introduction.

You can grab it for FREE from SoundCloud. Here’s two fine reasons to below!

Wick-It The Instigator – You Ain’t The Next DJ

For the past 24 hours I’ve been sinking my teeth into the Girl Talk’s latest album All Day, hence the delay.

Girl Talk (Aka Gregg Gillis) announced yesterday via Twitter that his new album and follow up to 2008 mash-up master class Feed The Animals, had been released for free.

Guess what? It features absolutely tones of mashed-up samples as you’d expect, it’s excellent so I’d strongly advise you to get it now! All Day is available to download for free right here courtesy of his label, Illegal Art.

Fancy streaming if before you download? You can do it after the jump.

END_OF_DOCUMENT_TOKEN_TO_BE_REPLACED

Max Tannone the brains behind Jaydiohead and Mos Dub is back, previously he’d mashed Jay-Z over Radiohead and Mos Def over old school reggae and dub cuts. The New York mix specialist has returned with Dub Kweli, yeah you guessed it, this time he’s turned his attention to the other half of Blackstar, mashing Talib Kweli with classic dub and reggae tracks.

This fusion of Kweli’s rhythmic delivery of intelligent, insightful and political lyrics with the old school Jamaican reggae and dub vibes feels honest and fresh, with Tannone’s eye for mixing and timing  coming to the fore. The end result isn’t too dissimilar to Mos Dub, excellent feel good vibes and rhythms that you can nod your head to, a must have for fans of hip-hop, reggae and mash-ups, and, oh did I mention it’s free?

I’m off to Oxegen for the weekend so won’t be posting anything until Monday I’d imagine but here’s two super bootlegs that’ve been distracting me all week. Hopefully they keep you going while I’m gone, I’m nice like that.

First up is a super mash up by Dutch Dj Don Diablo of his new single ‘Who’s Your Daddy’ and The White Stripes ‘Seven Nation Army’. I’m hoping to get a good listen to his forthcoming debut album ‘Exit Studio Sweatshop’ soon.

This super mashup of Jay-Z’s ‘Pray’ and Focus’ ‘Hocus Pocus’ from Trafik was dropped into my inbox this week. It’s a brilliant bootleg  which further compounds the theory ‘I love Jay-Z bootlegs’, weird that.  Trafik released their album None But The Brave on Global Underground last month.