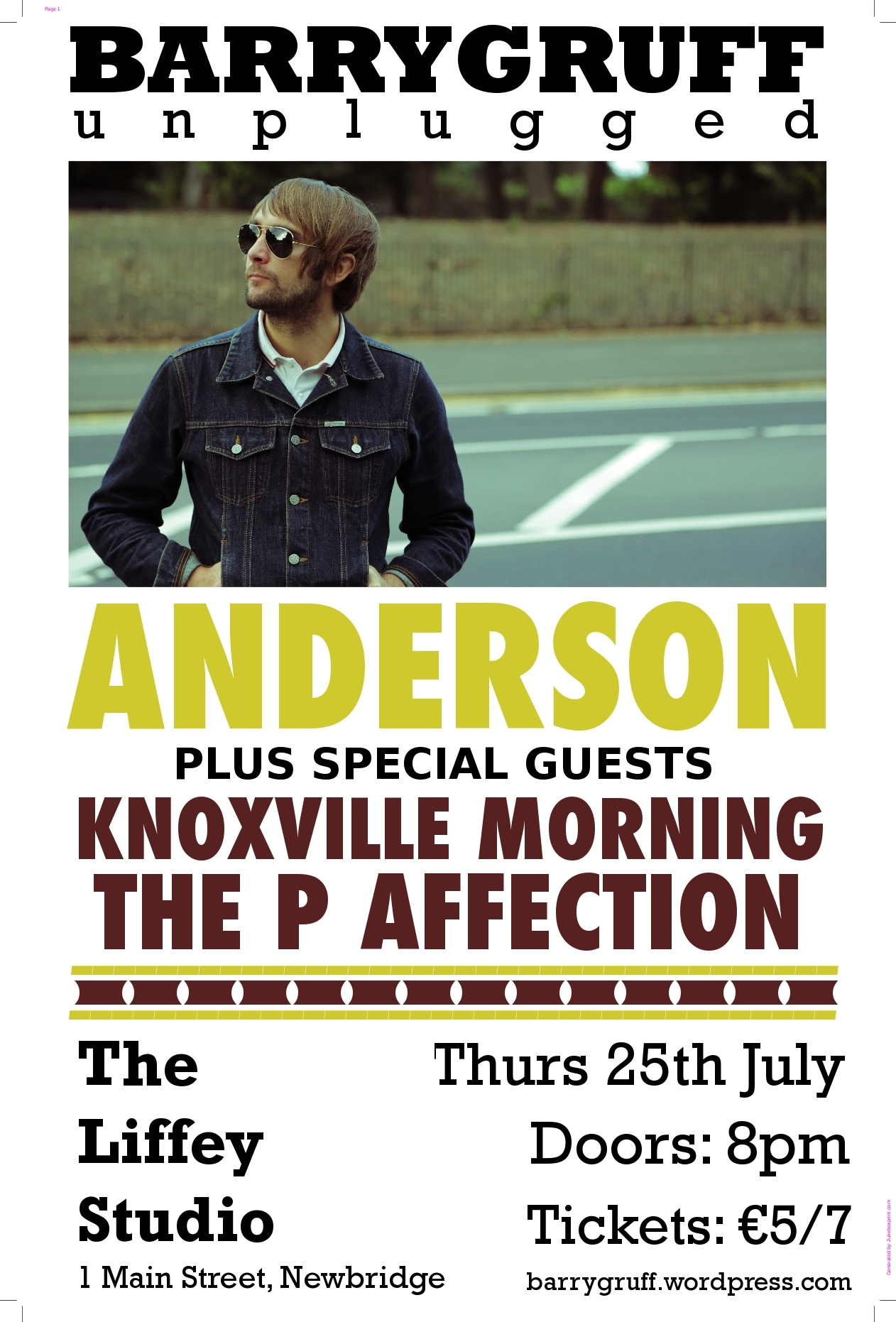 It has been an incredible experience putting on all these BarryGruff shows over the past two years or so. On this occasion we have decided to do something a little different and do a set of six unplugged shows in the wonderful intimate surroundings of The Liffey Studio. It’s a great little venue in the heart of Newbridge and it’s a perfect setting for this kind of show.

The first of the series takes place on Thursday, July 25th and will see three superb performances from Anderson, The P Affection & Knoxville Morning. Tickets €5/€7 – doors at 8pm.

It’s €5 if you book in advance or €7 on the night. The cheap list is limited so if you would like to reserve a spot send an email to: barrygruff[at]gmail[dot]com – with your name, & ‘Cheap List’ in the subject title. More details & info below. [RSVP]

Anderson is the moniker of Dublin musician and songwriter Daniel Anderson. With his former band The Rags, Anderson had already earmarked himself as one of this country’s finest songwriters. Since unveiling his solo-project last year, he has brought things to a new level. Anderson’s carefully crafted material manages a perfect balance from peppy and positive, to the melancholic. This is a folksy sound with irresistible classic ‘60s/’70s pop melodies, draped in Anderson’s intuitive song-writing and storytelling abilities. So impressive were his two releases to date, ‘Patterns / History’ & ‘Hallowed Heart’, that he bagged a couple of special guest slots with Villagers earlier this year.

Naas indie-rockers, The P Affection are the brainchildren of multi-instrumentalist Padraig McCauley. The P Affection have impressed no end over the past few years with two great albums. Their sound incorporates a wondrous blend of indie-pop, rock, ska, and folk, formed into a distinct and cohesive sound all of their own. McCauley will strip things back for this unique and intimate performance.

Knoxville Morning need very little introducing for a Newbridge audience. On this occasion it will be a solo show from chief songwriter and frontman Ciaran Dwyer, who’s teasing out some new jams, as the band work on their second album. This will be the first new material since last year’s great self-titled debut which enlisted the help of fellow BOAI members, Stefan Murphy, Gavin Elsted, Brian Gallagher, Claire Prendergast, Stephen Fahey and Laura Caffrey. The result? A record of sweet folk, country and Americana, and while it wears its US influences on its sleeve, Dwyer’s intuitive storytelling remained a cornerstone.