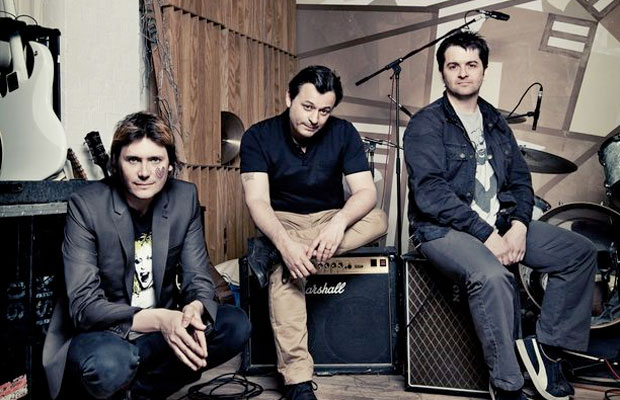 Yesterday the Manic Street Preachers unveiled the title track from new album Rewind The Film, which comes out in September.

The album is one of two the band have apparently been working on simultaneously; one gentle acoustic and one spiky, with lots of guitars. Based on the evidence of ‘Rewind The Film’, we’re getting the acoustic one first. The Welsh rockers sound like their in a more reflective mood on this occasion, with Richard Hawley trading vocals with James Dean Bradfield. Hawley lends more than his voice to this brooding and cinematic number. Opening with delicately plucked guitar and the whisper of violins, it has his mark stamped all over it, before Dean Bradfield enters the fray with his impassioned vocals. A rather stirring lament which bodes well for the forthcoming new record.

News of new Manics’ material also provides the perfect opportunity to share this little gem, which the band gave away recently. It’s another collaboration of sorts, with Gruff Rhys teaming up with The Manics for a rendition of ‘Let Robeson Sing’ at the O2. It’s slightly off the point but sure what’s not to like about Gruff Rhys teaming up with The Manics? Consequently (and controversially I’m sure) ‘Let Robeson Sing’ is taken from my favourite Manics’ album, Know Your Enemy.

You can check out the tracks below. The Manic’s will play Dublin’s Olympia Theatre on September 20th, days after the release of the album on September 16th.