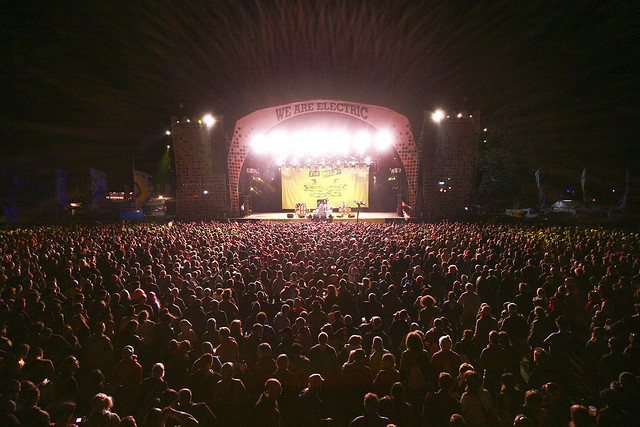 This time last week there were a lot of tired minds and weary bodies after Electric Picnic. It was a great weekend with plenty of highlights, musical & otherwise. That said, I have yet to find the time to pen anything of consequence about the weekend. No such problem from the every reliable Johnny Feeney, who’s here to share with us his five highlights from the weekend. Huge thanks to Mr. Feeney for taking the time to put together another excellent piece.

Bizarrely, Deap Vally formed in LA in 2011 after Lindsey Troy and Julie Edwards met in a crochet class. Thankfully, their brand of primal, scuzzy blues/garage rock is about as far removed from crochet as is humanly possible. The scantily clad duo, brimming with attitude and oozing sex appeal, open here with the storming, filthy End of the World and don’t let up for the next 45 minutes.

Troy leads on guitars and vocals, banging out huge power riffs and a bellowing wail, with the fiery Edwards hammering away at the drums like a woman possessed whilst also providing backing vocals – their sound is not a million miles away from the White Stripes. Drawing on songs from their excellent debut album Sistrionix, these girls pack a serious punch. Standout tracks include the visceral ‘Make My Own Money’, the downright nasty ‘Walk of Shame’ and ‘Bad for my Body’. Music so brilliantly dirty you feel like you need a wash after it.

Continuing the veritable feast of garage rock on Cosby Stage on Saturday afternoon, Brooklyn 4-piece Parquet Courts take to the stage and soon have the sizeable crowd spellbound with their spiky tunes. The band are supremely tight and confident and have a fine set of songs to choose from – their debut album Light Up Gold is another album that should rate very highly on this year’s best albums lists.

Guitarists Andrew Savage and Austin Brown swap vocals throughout while the songs are propelled on ably by the rhythm section. As on record, they willingly invite as much feedback off the amps as they can, and as they do during ‘Light Up Gold II’ among others. Other highlights include ‘Master of my Craft’ and ‘Yr No Stoner’. A highly accomplished set. They play Whelan’s in October and that gig is one not to be missed.

There were plenty of quality all-female acts on show over the weekend and Savages, a four-piece London outfit, are another band to fall into that category. They come onto the stage dressed all in black with the lights down (they stay down for the whole show) and their music suits the mood perfectly. They play brooding, dark post-punk from their fine debut album, Silence Yourself, and it’s all really quite hypnotising.

Jehnny Beth is captivating with her haunted vocals and androgynous looks – with her short cropped hair and eccentric dance moves she gives off more than a hint of Ian Curtis. As you would expect with a post-punk band there are some fine bass lines that drive the songs along. There’s thrilling menace to tracks such as ‘She Will’, ‘Husbands’ and ‘City’s Full’. If you like your music dark, then look no further.

John Grant was a personal highlight at EP two years ago and it’s clear from the off here that we’re in the presence of something truly special once again this evening. Grant released his second album, Pale Green Ghosts, earlier this year and with its harsher electronic sound, it’s quite a departure from his tender piano-led debut. Grant, a gentle giant, switches effortlessly between the two albums throughout the performance.

An early set highlight is the delicate ‘Marz’, a delightful song about a sweet shop from his youth. The new songs such as ‘Pale Green Ghosts’ and ‘Black Belt’ sound great with Grant occasionally sitting down to play synthesiser. Good friend Sinéad O’Connor joins him on stage to huge applause to provide backing vocals for the final three songs (she also provides backing vocals on PGG). The epic ‘Glacier’ is magnificent while he closes with ‘The Queen of Denmark’ – a real showstopper and a song so beautiful as to seem scarcely real. Magical.

Arctic Monkeys have built up a potent arsenal of classic songs since they burst on to the scene as fresh-faced youths back in 2006 and they’re not afraid to use the weapons at their disposal, which is in full evidence at the main stage on Sunday evening. A huge crowd have gathered and are given a real treat as Alex Turner and co rattle confidently through their set while a very rowdy main stage crowd jump around and sing along with reckless abandon. I’d be amazed if there weren’t dozens of personal items lost and bones broken by the crowd up the front.

Opening with super new track ‘Do I Wanna Know?’, the band then swagger through classic songs such as ‘Brianstorm’, ‘Dancing Shoes’, ‘Crying Lightning’ and ‘Old Yellow Bricks’ while Stradbally laps it all up. The combination of ‘Pretty Visitors’, ‘I Bet You Look Good on the Dancefloor’ and ‘Do Me A Favour’ is particularly brilliant mid-show before Alex swaps his electric guitar for an acoustic one and plays a lovely rendition of ‘Cornerstone’. The tempo picks up again for the finale with ‘Fluorescent Adolescent’ and ‘R U Mine?’ before the band leave the stage. For the inevitable encore, the opening lines of ‘When the Sun Goes Down’ sends an already elated crowd into a frenzy, the weekend’s high point, before the band closes with the stunning ‘505’. A masterclass in headlining a festival and an absolute triumph.