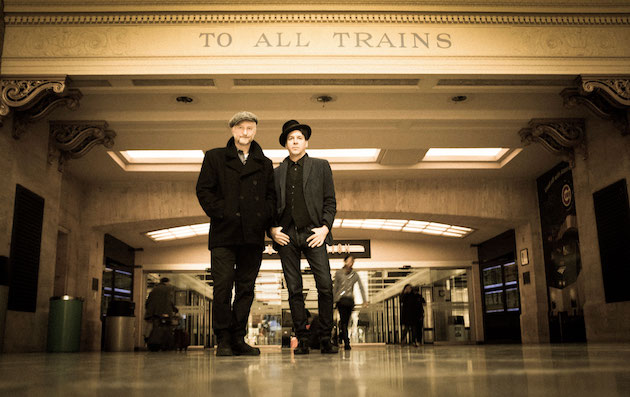 In March, 2016, Billy Bragg and Joe Henry caught a train from Chicago to Los Angeles. Over the course of the 2,728 miles of winding track, they recorded a collection of classic railroad folk and blues songs – originally made famous by Hank Williams, Lead Belly, The Carter Family, Jimmie Rodgers, Glen Campbell & more – at various stations along the way.

The result is the new album, Shine A Light: Field Recordings From The Great American Railroad, which they recorded live at train stations, and will be released on September 23 via Cooking Vinyl. To get us right in the mood, accompanying this announcement is ‘The Midnight Special’. First recorded in 1926 by Pistol Pete, a member of the western group Otto Gray and his Oklahoma Cowboys, the song is generally attributed to Leadbelly, who recorded his version while serving time for attempted homicide at Louisiana’s Angola Prison Farm. Bragg and Henry have stuck with the acoustic roots of ‘The Midnight Special’, and the result is pretty damn fine. Those rough harmonies and rustic sound, work ever so well.

Watch a trailer for the album and listen to ‘The Midnight Special’ below.