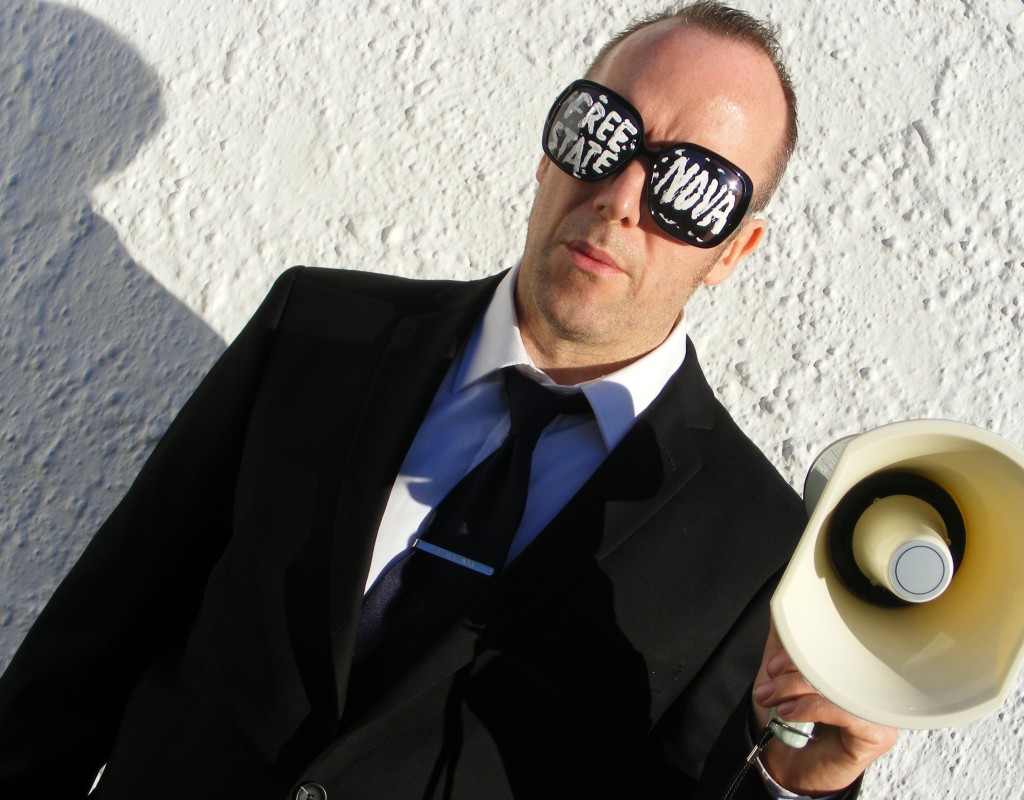 So, we’re back with part four of the series on Thursday, April 24th, and we welcome the legendary Jinx Lennon and Appo to the intimate surroundings of The Liffey Studio, Newbridge.

To say we’re excited by this one would be putting it mildly. At the beginning, before we’d organised a gig, Stevie & I sat down to ponder what we could do, during this pipe dream exercise there were maybe three acts we agreed ‘had’ to play. Jinx Lennon was one of them and why not? Jinx is an absolute genius, a national treasure and rightly described by Christy Moore as the most important Irish singer/songwriter in the past 10 years.

Jinx Lennon is the epitome of a modern folk singer influenced by post punk and hip hop. Awkward and real, raw and righteous in his mode, he comes out of the northeast lost province of Oriel armed with songs to blow apart the chains in your heads. Songs about kicking against the bullshit of life .Whether it’s played on a one string guitar or sampled disco beat and raw garage noise and blues – Jinx’s music is sure to make the atoms on your skin surface vibrate externally for eternity. Jinx is currently in his HQ working on songs for next album working title ‘Keep Sane In The World of Eager Smiling Pricks’.

Support comes from Newbridge’s very own diamond in the rough, Appo, a one man bluesy-folk explosion. The gravelly voiced troubadour has also been busy in the studio working on a new album. 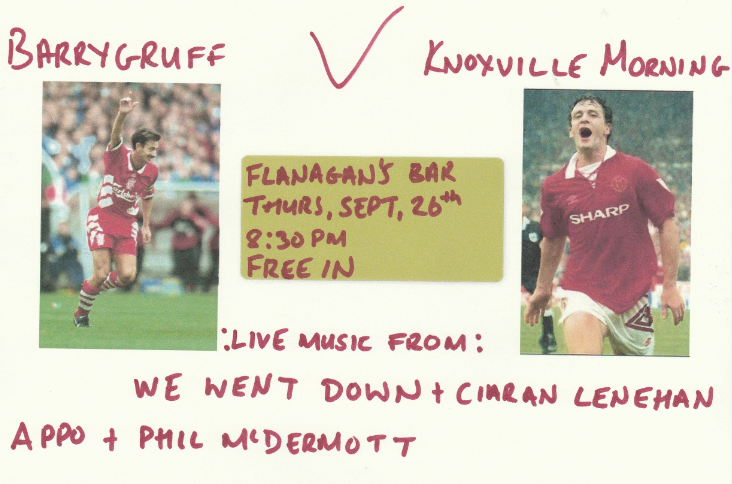 It should be a great night of live music as we bring you a show with four excellent acts, with sets from We Went Down (KM), Ciaran Lenehan (BG), Appo (BG) & Phil McDermott (KM). There’s been some cracking nights in Flanagan’s and elsewhere over the past two years or so, and Thursday night’s ructions shouldn’t be any different.

It’s FREE in as always & we’ll be kicking things off at 8:30. Much more info and sounds after the jump. RSVP here.

Heartfelt Folk’ n Roll three-piece from Tallaght, Dublin. In there own words: “Two chancers bumped into a lad in an off licence, Questions were asked, We drank cans, We jammed tunes, We Went Down.” There music speaks louder than any promo/pr nonsense. Check it below.

The second of two Tallaght acts, Ciaran Lenehan, has become a firm favourite in Newbridge and makes a welcome return to the town, ahead of the release of his long-awaited debut album, These Stories, in November. To keep it relatively short; Lenehan is a songwriter to be reckoned with. Simple, assured and engaging and most importantly he has the talent to make wonderful stories into fantastic songs.

END_OF_DOCUMENT_TOKEN_TO_BE_REPLACED 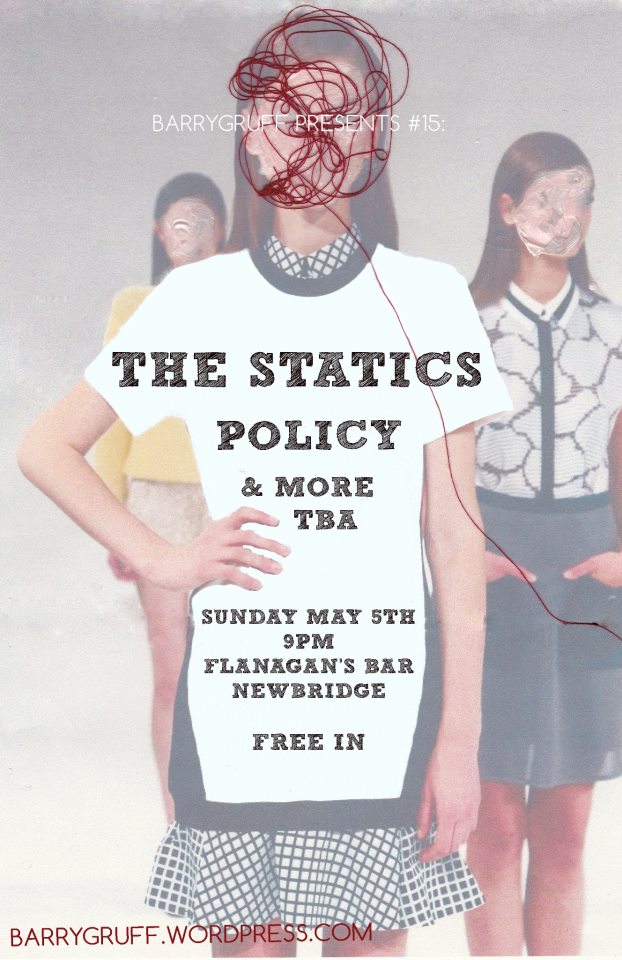 While other artists in Newbridge have gained note and notoriety as prying eyes (and ears) look in amazement and steady stream of quality music emerging from this town, one man in particular has somehow managed to avoid this gaze; Appo. The gravelly voiced troubadour (real name David Aspell) has remained one of Newbridge’s best kept secrets for quite a long time.

This narrative might be about to change with news he is currently recording a debut release (an album as far as I can gather). This excellent news also provides a perfect excuse to share some recordings from an impromptu session late last year (recorded in Newbridge by Stephen & Ciara Connelly).

Like has been said before, Appo is a wonderful songwriter, who’s powerful blues/folk is a work of genuine veracity.

All aboard for 11th and final BarryGruff Presents show (of this year) in Newbridge!

The P Affection is the brainchild of multi-instrumentalist Padraig McCauley. The Naas based band’s self-titled debut was released to rave reviews and followed by Cakes For Occasions earlier in the year, has exceeded even their lofty expectations. They have grown as a band, their sound even tighter; a wondrous blend of indie-pop, rock, ska, and folk is formed into a distinct and cohesive sound, all of their own. The Depravations are Galway four-piece indie-folk band who take their influences from a combination of ’50s and ’60s surf music, old country and blues. With a couple of excellent EP’s filled with music of rich sounds, stories and harmonies; they are one of the West of Ireland’s hidden treasures and certainly not to be missed on their first appearance in Newbridge.
Meanwhile support comes from special guest, Newbridge’s very own, Appo. Always a scintillating live performer, the gravelly voiced troubadour’s blend of folk and blues is powerful, captivating and delivered with some gusto.This will be the last ‘BarryGruff Presents’ of the year, so let’s send of 2012 with a bang!

Entry is FREE as always and the show starts at 9.00pm in Flanagan’s, Newbridge on Saturday, December 15th. [Facebook event]

At long last indeed. If there was ever a post that was long overdue, this is the one. Bereft of an internet presence Appo (aka David Aspell) has managed to remain one of Newbridge’s best kept secrets for quite sometime.

That’s not to say he’s not been busy, quite the opposite in fact, doing things the old fashioned way hitting the gig trail; including a couple of BarryGruff gigs and support for Damien Dempsey. Always a scintillating live performer, the gravelly voiced troubadour’s blend of folk and blues is powerful, captivating and delivered with some gusto. A wonderful songwriter, who pours his heart and soul into his works of genuine veracity.

‘Cold Cold Rainy Night’, ‘Broken Love’ and ‘The Sea of Souls’ are taken from some studio work with Poggy Dillon in Newbridge, allowing others not privy to his shows a glimpse of his talent and blow his cover once and for all.

It’s going to one hell of a night w/ 3 great live performances from The Annulments, The Cedar Sound, Appo & DJ sets till 2am from Robbie Coffey & Cormac Brady (Super Extra Bonus Party).

Dublin quartet The Annulments’ sound comes from a broad blend of influences, taking in blues, folk country, dixieland, mountain minstrelsy, soul and rock and roll. With a respect for these musical traditions, they create wonderful and arresting tales of unjust love, mislaid plans and labours lost. The Annulments are a band whose stock is steadily on the rise.

Accompanying them on the bill are The Cedar Sound and Appo. Compiled of members from Kildare and Dublin, The Cedar Sound have hit the gig trail this year, taking their Americana Folk sounds with them across Ireland. Meanwhile Appo, one of Newbridge’s finest troubadours, returns for his second performance of the series. He and his gravely bluesy-folk remains one of the town’s best kept secrets.

Entry is FREE as always and the show starts at 9.00pm and runs until 2.00am in Flanagan’s, Newbridge on Saturday, September 15th. For more info & Facebook event.

Last month we hosted the very first ‘Barrygruff Presents’ show in Flanagan’s, down here in Newbridge.

The performances from both Appo (w/ Aoife & Mark Byrne) and Ciaran Lenehan went down a treat with the punters. I was genuinely shocked with just how many people turned out for the show, it’s that kind of thing that makes it worth doing.

It was a massive success on so many levels, so much so that we’re doing another one on Thursday September 22nd (Arthur’s Day) w/ We Are Losers and No Monster Club but more on that later.

There are a couple of videos below and you can download the sets from both Appo & Ciaran Lenehan too – technology eh?

Before wrapping things up a huge thank you to Stephen Connelly, Cillian Duffy, Tim Crowley for the sound/recording, Robbie O’ Donnell, Joe Dunne and Orlaith Halpin for the videos.

Sure we might see you at the next one on the 22nd?