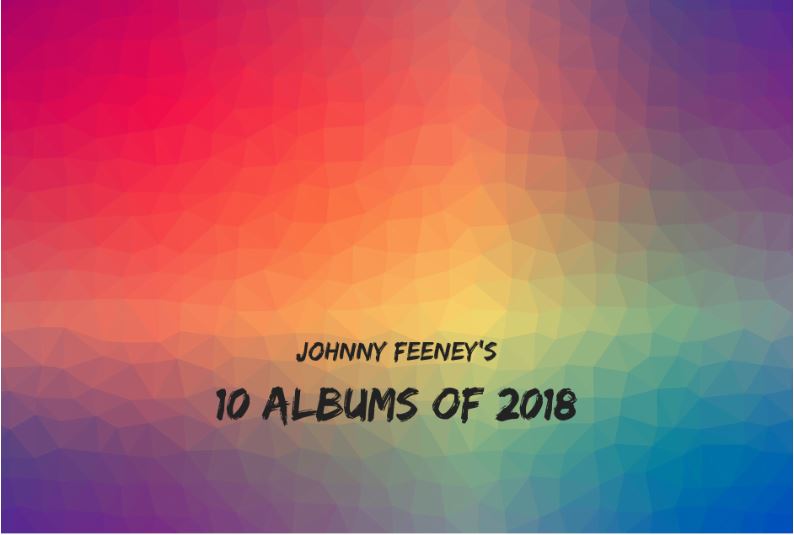 Aside from compiling my own end of year lists, I always look forward to checking out other people’s take on the year and none more so than that of Johnny Feeney.

A massive thanks to Johnny for taking time out to compile this list, and on that note, I’ll leave you with his Mr. Feeney’s favourite records of 2018.

New York City garage-rock outfit Parquet Courts enlisted the help of Danger Mouse on production duties for their sixth full-length studio album, with a more polished sound evident throughout. The band’s trademark spiky guitars are joined intermittently by keyboards, cowbells and whistles to create a highly entertaining and fun record.

The kaleidoscopic third album from Django Django is a veritable smorgasbord ranging from the group’s distinctive, jangling Beach Boys-style surf rock to lilting dancehall to electronic club bangers. Although there are some slower moments of real beauty present, the high points are when the Djangos speed things up such as on ‘In Your Beat’.

The Bristol punk-rock quintet go from strength to strength with their second album, following up from last year’s brilliant debut Brutalism. The album’s twelve tracks of pummelling, angry punk are a furious state-of-the-nation address to post-Brexit Britain, with moments of lacerating wit thrown in for good measure by formidable lead singer Joe Talbot. Powerful.

The debut album from this London-based all-female trio is punk-rock at the other end of the spectrum from IDLES but is nonetheless a fantastically good listen. Dream Wife specialise in melodic, (mostly) radio-friendly pop-punk with incredibly catchy hooks, lots of attitude and feminist undertones that may not become too apparent until you see the band live.

One could never accuse Young Fathers of being afraid to experiment musically. The third album from the Glasgow hip-hop trio, which may not be to everyone’s taste, is overflowing with ideas and creativity from start to finish. Amid the dense layers of unsettling, skittish electronics and looped gospel-style singing, there are moments of undeniable brilliance.

The Brighton trio’s debut album is not particularly easy to shoehorn into a single genre but is a wondrous affair of hazy, fuzzy post-punk / shoegaze / dream-pop, constantly alternating between bursts of wailing walls of loud guitars and softer, more delicate moments. Although a certain level of atmospheric brooding is omnipresent, this is by no means a dark or depressing record.

Anyone familiar with Anna Calvi will already have a fair idea of what they’re getting on her third record, Hunter – virtuoso guitar playing combined with Calvi’s powerful, commanding vocals. Along with lyrics dealing with gender, desire and loss, swathes of synths have also been added to give a further cinematic feel – such as to astonishing effect on the title track.

This debut album from the Melbourne five-piece is rousing, rollicking indie-rock at its finest – something that’s getting harder and harder to find these days. A pulsating rhythm section drives the songs along while the guitars weave intricate patterns and infectious hooks around the vocals, with space left in between for a few cracking solos. There’s nothing groundbreaking on here, just ten masterful tracks done exceptionally well.

Norwich duo Let’s Eat Grandma’s highly accomplished sophomore album is a staggering work of synth-pop, made all the more impressive considering both members – Rosa Walton and Jenny Hollingworth – are only 19-years-old. The songs throughout are laden with icy synths and gorgeous melodies with some jaw-dropping moments such as on ‘Falling Into Me’ and the epic closer ‘Donnie Darko’, which is closer to an electronic symphony than a pop song. Stunning.

Hailing from the same area in Brixton that spawned the Fat White Family, this five-piece’s debut album is a genuine tour de force. How this didn’t even get a Mercury nomination I’ll never know. For such a young band there is a seriously impressive variety to their songs from punk rock to indie rock to Happy Mondays-style groove to the shimmering shoegaze of ‘Angie’. Singer Charlie Steen is a force of nature in his own right, bending his voice at will to suit the mood. A supreme live band to boot, seemingly this band can do anything.