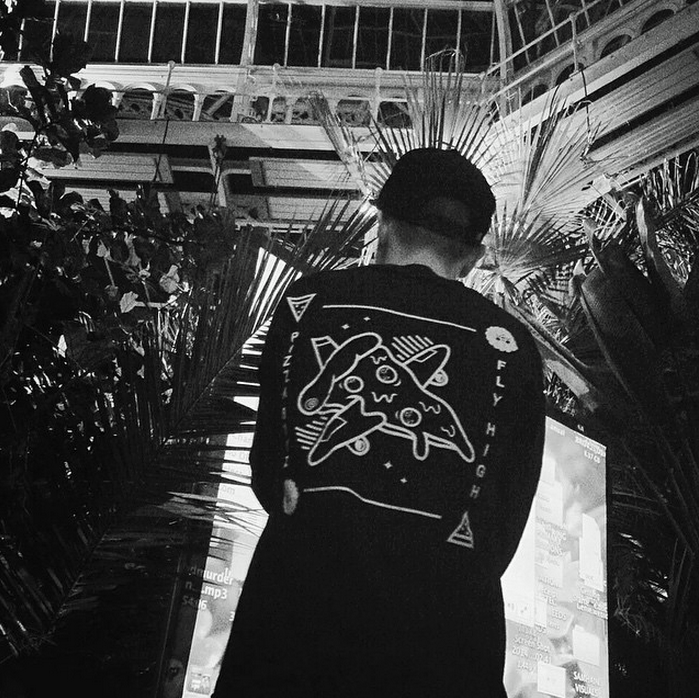 It was a truly fantastic way to mark 5 years of BarryGruff and I am incredibly grateful to everyone involved and the overwhelmingly positive and enthusiastic response. As 2015 draws to a close, I have enlisted help from people who made the compilation what it was, to chat about their favourite moments and sounds from year, and up next is SertOne.

Before we take a look at his 2015 sound selections, you should check out SertOne’s superb back catalogue here and his GruffWuff inclusion, ‘Seventeen’ – of which you can download here for FREE.

Not strictly a musical highlight, but kinda related was our recent party in London with Dummy Mag. Everyone at Fly High Society has been working really hard this year and it felt like we could enjoy the fruits of our labour that night. Purely out of logistics of where everyone lives, we don’t get to link or hang out a lot outside of doing shows and stuff but the group energy or vibe is always the same and feels like we pick up where we left off last time.

It was a few days after Iglooghost had released his EP on Brainfeeder and we booked Kutmah to headline as its something we have wanted to do for a long time as he is a huge inspiration to what we all do. The party was a lot of fun and the crowd was way beyond what we expected, every time we where in the smoking area he could see a line to get in all night. Working on label stuff, events, and music in general can be very withdrawing at times and with so much of the industry happening online these days, its nice to have that real world pay off.

32 Zel / Planet Shrooms by Denzel Curry, it’s technically a double EP but its like 14 tracks long. I’ve been into Denzel Curry’s stuff since I heard his Threatz track in 2013, think he was 18 when he recorded it. I’ve always been a really big fan of rap and always like anyone who tries doing anything outside the box. In the two years since Threatz you can already tell he’s outgrown many of the signature sounds and stereotypes attached to a lot of southern rap music pushing it to the extreme on a non-album track like ‘6 Billion Dollar Ni**a’ or ‘Ultimate’ which is something closer to hardcore punk inspired rap from the likes of Death Grips, NAH or GIVV.

32 Zel / Planet Shrooms is a great mixture of experimental rap beats and lyricism miles beyond what is usually heard from the southern states with a constant on edge masochistic undertones. Nostalgic 64, his debut album in 2013 felt very much like the battle of good and evil within a young persons life growing up and becoming an adult and all the disappointing realities that come with that, perfectly summed up in ‘Parents’. This 2015 outing though see a much more life hardened 20 year old.

The internal battle between good and evil seems fought, a more irreverent Denzel is the case and his lyrics contain his signature cynicism but now dark humour intertwined. On this album the songs and beats can change at the drop of a hat and songs are often blurred together. It doesn’t sound out of place as you feel each instrumental is given full attention even if that means he can kill the beat in 32 bars, something I’ve always enjoyed in Grime culture, onto the next riddim. Ever since I first heard him Denzel’s always seemed wise beyond his year and can’t wait to watch him develop more as an artist. I can’t wait to hear what he’s doing in 6 years time.

I didn’t find a huge amount of new artists this year, more to do with focusing internally on music and the label stuff doesn’t leave much room for new stuff unless its directly related to us or for radio but one EP I really enjoyed this year was Froyo Ma and his EP Pants. It’s like a mixture between Neo-Soul, Toro Y Moi and Shigeto, and does a lot of work with vocalists and rappers too. Don’t sleep on him.

An oldie but a goodie. Surrounded by music sometimes through out the year that I needed a quick blast of this to refresh my head.

We have a lot of releases lined up for Fly High Society in 2016 including EPs from Monto, Mr. Yote, Trampoline Tax, and we have our first vinyl release out early 2016 with Dada Cantona, who will be dropping a tune ‘Canal’ on a 7’’. We will be having more parties, our London night Cult Studies is returning in 2016 as well and we are talking to a few different promotors about shows around the UK and Ireland so hopefully we will be in a city near you soon. Our flyhighradio.org is expanding with more shows in the new year too!

Personally, I think am going to be spending a lot of time writing music this year and hopefully some of that will see the light of day as soon as possible. I have a single and video forthcoming on another label but thats unwraps for a while. I was also lucky to get a recording session with the Rusangano Family when they where in Liverpool and we got a good amount of music done, I hope that comes out 2016.