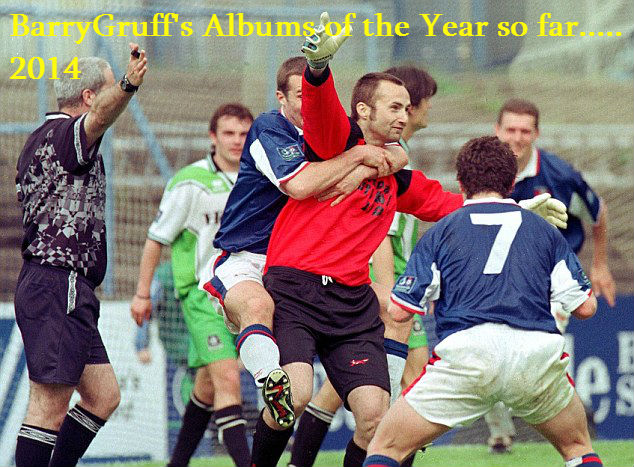 With over half the year already passed, it is ripe time for some half-time reflection on the many albums that have preoccupying my attention so far in 2014. As it is well overdue there is no need to waste and more time, here they are, in all their glory!

Lo-fi English punk duo of Jason Williamson and Andrew Fearn are Sleaford Mods, who’ve been grunting through gritted teeth since ’08. With their new album, Divide & Exit, they deliver a clever, often funny, foul mouthed and angry record, overloaded with attitude as their gripes and grievances with modern Britain (and beyond) are vehemently aired. Chief rabble-rouser, Williamson is both scathing and sardonic, who airs his many gripes and grievances, with a combination of vitriolic anger and acerbic wit. An extremely clever wordsmith, his righteous and infectious rantings are as quotable as Half Man Half Biscuit. You could argue forever as to what line in the gold-standard song is the greatest. This extremely clever wordplay is strewn among grimey beats and wiry post-punk guitars from Fearn. While owing as much to hip-hop and grime as to post-punk, and could be seen to be the the modern inheritors of the brilliance of Mark E Smith, The Streets, Shaun Ryder and HMHB. While there are traces of those artists here, there is, and never has been anything quite like Sleaford Mods. Top fucking class.

After concept albums about a wealthy Italian Trotskyite, an eccentric car designer, and a movie in search of lost Welsh tribes in Argentina, nothing should surprise us when it comes to Super Furry Animals frontman Gruff Rhys. His fourth solo album is inspired by a recent discovery that he’s a descendent of John Evans, an 18th-century explorer, who mapped the Missouri river in a vain search for a mythical, Welsh-speaking American tribe. Concept aside, this record shares certain similarities with his previous work, cooking up lush pop songs with more immersive and introspective fare, beautiful orchestral moments and even a couple of more surreal, out-there moments. From the title track, the mournfully mesmerising ‘American Interior’ and it’s expansive, slightly melancholic rock with an infectious melody at its heart, to the rumbling rockabilly of ‘100 Unread Messages’ on synth-splashed carnival tune ‘The Whether (Or Not)’ we’re treated to exemplary spectrum of his talents. American Interior reminds us how captivating a storyteller Rhys is, who wistfully spins wonderful narratives of being carried through new worlds and visions, and only adds to the particular idiosyncratic charm that this Welshman personifies.

Malachai‘s latest effort, Beyond Ugly serves as a closing chapter to the Bristol duo’s ‘Ugly’ triptych, an unplanned trilogy of albums and pre-dated by the excellent Ugly Side of Love (2010) and Return to the Ugly Side (2011). Beyond Ugly is enjoyable as a standalone record if you’re unfamiliar with the previous two. It’s an imaginative journey through controlled chaos which seamlessly flits between trip-hop, hip-hop, acoustic folk, ’60s psychedelia, dance-funk and XTRMNTR era Primal Scream doses of aggressive political anger within the same breath. Expect to witness lavish sonic mayhem and delicate, thought-provoking moments on love, loss, life, politics and society. Vacuous it isn’t, there’s quite a bit of substance behind the aural salvo. A fitting conclusion to this unlikely of trilogies, saying that, hopefully it isn’t the last we’ve heard from Malachai.

Dubliner Shit Robot aka Marcus Lambkin’s new album We Got A Love, the follow up to 2010’s stellar debut, From The Cradle To The Rave. is a spectacular example of super cool, swaggering and funky disco-dance. It is a record as indebted as ever to the pioneering dance noises that seeped out of the late ’80s and early ’90s, and one of subtle yet danceable songs, oozing with an essence of complete and utter coolness. Lambkin ticks all the old-school boxes, serving up a homage to the music he obviously loves while creating something thoroughly danceable and equally enjoyable.

Pharoahe Monch‘s ability as an MC is without question, he never fails to deliver incredibly when he picks up a microphone. To keep it simple – he’s one of the best in the business. Following on from his stellar 2011 record W.A.R, fourth solo LP, PTSD (aka Post Traumatic Stress Disorder), is a loose-concept album which sees Monch speaking as a weary independent warrior against the industry machine and dealing with the struggle of the black male experience in America. It’s dense, raw and sometimes painfully raw, as he relives harrowing memories of his struggle with addiction, depression and suicidal thoughts. It’s all draped with his familiar top-notch storytelling, cavernous vocabulary, thought-provoking rhymes, precise delivery and thought-provoking metaphors, placing him right up top of the current hip-hop pile.

The side project from We Are Animal guitarist & vocalist, Owain Ginsberg, continues to prove rather fruitful with debut album Mother Tongue. A kaleidoscope of Morricone meets krautrock sounds harnessing the raw energy, experimental tenancies and ear for a serious groove of his day job. A fascinatingly imaginative and experimental exercise in free-flowing, slightly off-kilter natured, instrumental jams. ‘Name your price’ and Hippies Vs Ghosts‘ debut is yours from here.

What strikes you as soon as you set Tweens‘ debut LP loose on your speakers, is the raw energy and spirit that drives the album. From the thundering, lightening fast opener ‘Bored in the City’ to ‘Be Mine’ and ‘Rattle + Rollin’ the flamboyant energy never dies – say for one of two more providing a well needed breather here and there. It’s a trashy, bratty and tawdry collection of lo-fi garage-pop jams as singer Battle, among other things, laments her boredom with life and castigates boys she does and doesn’t like. It may be a predominantly hyperactive mesh of lively pumped up punk and garage riffs but Battle’s agitated screech injects a further level of gritty dynamic. An enjoyable take on a well travelled genre and style, doing it justice with an album which sounds crisp, edgy and fun.

On Welsh lo-fi-fuzz pop wizards Mowbird‘s debut, they fuse this predilection for fuzz pop, with parts surf-rock, slacker indie and some garage punk nuances to create fun filled blasts of sub 3 minute, easy to listen to tunes. There is a real spontaneity and energy to their sound, a theme running throughout Islander, as we’re treated to scuzzy, charming, soul-consuming guitar jam after another. It kind of feels like an unrehearsed and unplanned journey into the unknown, that succeeds in going where feels right without putting a single foot wrong. How have they remained a secret for so long?