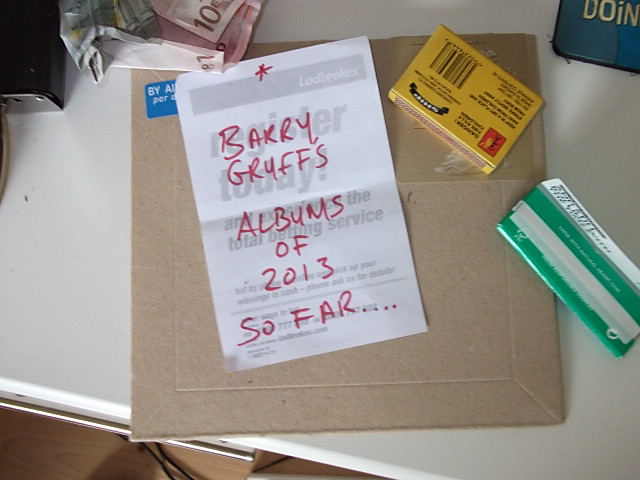 Due to various reasons I’ve been slacking with album reviews this year. That said, I’ve been listening to more than ever before but finding the time to pen some musings about some of them. In an attempt to redress this situation, here’s the ten albums that have impressed me the most so far this year.

Dreaming in Key is the third LP from young Dutch producer Applescal. Comprised of 11 tracks, the album isn’t too easy to pin down, finding itself in an ambiguous hinterland between electronica & techno; meaning it comes across as both dreamy and driving. It is also marked by the track’s complexity. Lavish layers of sound are met with impressive sound sequencing resulting in a warm, mellow vibe. Applescal is on top of his game.

Mergers of folk and glitchy electronica can at times yield yawnsome middle of the road, chin stroking bollocks, but not so for Welsh duo Trwbador (aka Angharad Van Rijswijk & Owain Gwilym). Since forming in 2010, the pair have forged a distinctive and fruitful partnership for producing serenely beautiful, otherworldly music. It’s a trend carried through to their self-titled debut which sees warm folky sounds and whimsical vocals pinned to electronic glitches and loops. It contains a real sense of tenderness, twinkling and flickering simultaneously, it is both carefree and hypnotic. A magic and irresistibly beautiful album. This is absorbing music to get lost in.

Most likely the greatest album to be recorded in a caravan, Secret Soundz, Volume 2, is the second LP from The Pictish Trail, the alter ego of Scottish musician Johnny Lynch. Throughout the LP, he’s in a contemplative, often melancholic mood, concerned with life’s ups and downs. In contrast, musically Secret Sounds is rather chipper, spurred on by a glorious melange of oddball sounds, sparks of frazzled electronics and instrumental breaks. A magnificent record; warm, inviting and full of charming quirks from an exceptional talent.

Ireland certainly produces plenty of great bands, but for me, where it falls short of say our Welsh neighbours, is when it comes to indie bands of the weird and wonderful variety. But in Biggles Flys Again we’ve got a domestic talent expertly filling that void. Biggles Flys Again is the moniker of Dubliner Conor Deasy, who’s got a real talent for crafting 3 minute pop gems. Biggles’ debut album Remember Saturday is brimming with enchanting and whimsical good old fashioned pop songs, filled with sinuous melodies and organic arrangement. This is pop in the old fashioned sense, played by a band, and with an assured sense of style.

Touted as a concept album about the sea, and yes, there are plenty of sea related moments but the songs are mainly concerned with love and relationships, usually with a bittersweet edge. Ships is a wry take on lost love and heartbreak, sliding from darkly funny to piercingly tender, this is one of the most perfectly crafted indie-pop you’re likely to hear all year. There are so many highlights, ’If I Died…..’ opens the album perfectly and features one of the best lyrics – “Daniel Johnston has written hundreds of great tunes, and I’ve got six, so I guess there’s some catching up to do” – and a delightful melody and irresistible swirls of brass. That’s followed the startlingly perky ‘The Morse Code For Love’ and ‘Let’s Go Swimming Wild’, shrouded in a woozy veil of melancholy before bursting into life with a brass-filled chorus that won’t leave your head anytime soon. The North Wales native is an idiosyncratic artist with an ear for a sparkling melody and a gift for an evocative lyrical turn.

Since leaving The Coral in 2008, Bill Ryder-Jones has mainly embraced his talent for arrangement, concerning himself with orchestral, mostly instrumental works. Those skills are also utilised here as the ex-coral man looks inwards, penning a gripping album of pensive ballads and hushed pop songs. Each autobiographical tale builds with subtlety and restraint, forging touching slices of melancholy with wistful heart swelling melodies, delivered in a hushed, semi-spoken voice. Always one for shying away from the limelight, it is predictably melancholy and unassuming, with Ryder-Jones frequently sounding as though he’s trying to slunk out of the foreground. A highly accomplished and deeply affecting debut which should establish Ryder-Jones as a serious solo artist in his own right.

Having caught them supporting Crystal Stilts a while back, Girls Names were filed under ‘lots of potential’, ‘ones to watch’ or whatever musical cliche you prefer. The Belfast band’s second album has however, vastly surpassed all expectations, providing us with the best domestic record of the year so far. The New Life has a moody and dark disposition, as it unfolds with a sense of forbidding beauty, before spiraling headlong towards post-punk’s dreamier regions. This is winding, and at times faintly chugging motorik post-punk, with some sparkly Bunnymen-esque beauty thrown in for good measure, all draped in Cully’s spectral baritone.

Akala has easily been one of the finest voices to emerge in UK hip hop over the past number of years. Since the release of his debut in 2006, he has proven himself as one of the most articulate, intelligent and talented MC’s around.  A potent wave of righteous fury crashes through the London MC’s fourth LP, The Thieves Banquest. The world is beset by many problems, varied and plentiful they may be but Akala manages to take plenty of them head on. He remains passionate, focused and sharp when tackling everything from a sense of powerlessness to change things, to berating imperialism,  slavery, capitalists, 3rd world dictators and the clergy – he remains. Not only is this an excellent record, but it is probably his most complete work so far.

Inspectah Deck, 7L & Esoteric have come together as ‘Czarface’, taking ’90s East Coast Hip Hop as a blueprint and run it through the gauntlet, bringing it right up to date. This is hip hop that makes you bop, with beats that have more bounce than Zebedee. 7L’s production excels as he stitches together bits of dialogue to create a dark, aggressive and sinister subterranean-minded world that suits the two emcees to perfection. Lyrically it is filled with complex rhymes and similes, as Esoteric and Deck deliver verse after verse as a verbal art form. Add to this a pretty stellar supporting cast including Ghostface Killah, Roc Marciano, Action Bronson & Premier, and you’ve got one great record.

Where to begin? If his last album Boys Outside was an insight to his personal struggles, Monkey Minds in the Devil’s Time is an all encompassing record which moves from the personal to the political, combining both anger and beauty. Musically it is just as ambitious, a blend of  psych-folk/trip/hip-hop beats and dub overtones are the prefect soundtrack to his wonderful ghostly vocal. This is a record filled with genuine heart, soul and honesty – and of course plenty of righteous politicalised anger. It is rather difficult to do this album justice with a few meager words, we could be here all day listing superlatives, but if this isn’t Mason’s career defining masterpiece, it’s certainly bloody close. In short, it’s a work of inspired genius.