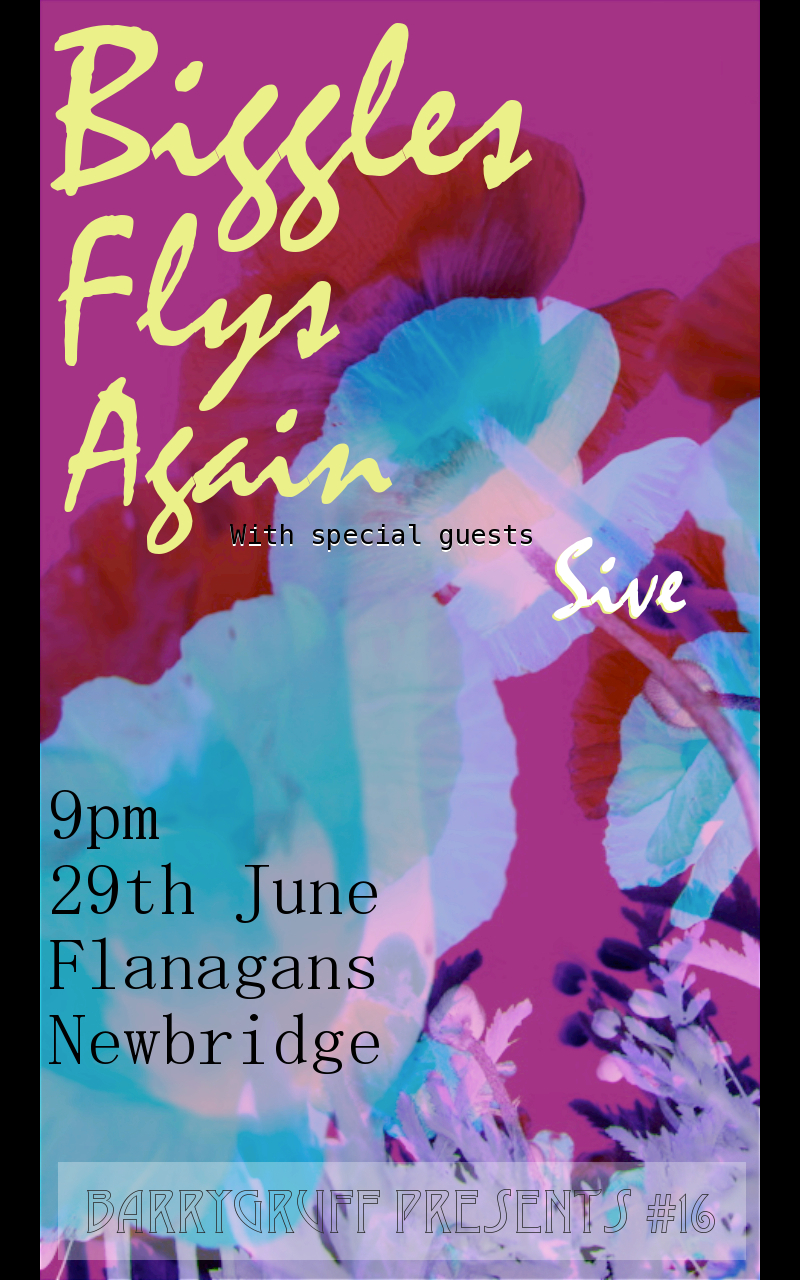 So, we took a little break, but we’re back again with ‘BarryGruff Presents’ #16 in Flanagan’s, Newbridge on Saturday, June 29th. We’ve got the superb Biggles Flys Again and the wonderful Sive performing, and the ever brilliant Knoxville Morning playing a special solo show (expect to hear some new tracks he’s been working on).

This is a really exciting lineup and one that promises to be a great night, so come along and enjoy the music. It’s FREE in as usual & kicks off at 9 pm. [RSVP]

Biggles Flys Again is the moniker of Dubliner Conor Deasy, who’s got a real talent for crafting 3 minute pop gems. Biggles’ debut album Remember Saturday is brimming with enchanting and whimsical good old fashioned pop songs, filled with sinuous melodies and organic arrangement. This is pop in the old fashioned sense, played by a band, and with an assured sense of style. Remember Saturday is one of the finest albums of 2013 and there’s plenty of others smitten with it too. The Sunday Times made it ‘album of the week’, The Sunday Business Post coined it as “a wistful, enchantingly gentle brand of day-glo alt-pop” and The Irish Times quite rightly said “Deasy has a canny knack for creating tunes the right side of familiar”. Extremely excited to bring these guys down to Newbridge, should be quality.

It’s been far too long since we’ve had Sive play one of these shows, they’re performance is always impeccable. Sive is the brainchild of Naas musician Sadhbh O’Sullivan, who along with her band, draw from a wide variety of alternative rock, jazz and folk influences. Sive’s gorgeous sound comes from a combination of these influences being fused with excellent musicianship and charm; not to mention her voice, which is simply exquisite. Sive’s debut album We Are Moving is well worth checking out, if you haven’t already of course.

It’s always a pleasure to have Knoxville Morning play one of these shows, they always go down an absolute storm. On this occasion we’ve got a special solo show from chief songwriter and frontman Ciaran Dwyer, who’s got some new jams and what’s to test them out. This will be the first new material since last years great self-titled debut which enlisted the help of  fellow BOAI members, Stefan Murphy, Gavin Elsted, Brian Gallagher, Claire Prendergast, Stephen Fahey and Laura Caffrey. The result? A record of sweet folk, country and Americana, and while it wears it’s US influences on it’s sleeve, Ciaran’s intuitive storytelling remained a cornerstone.