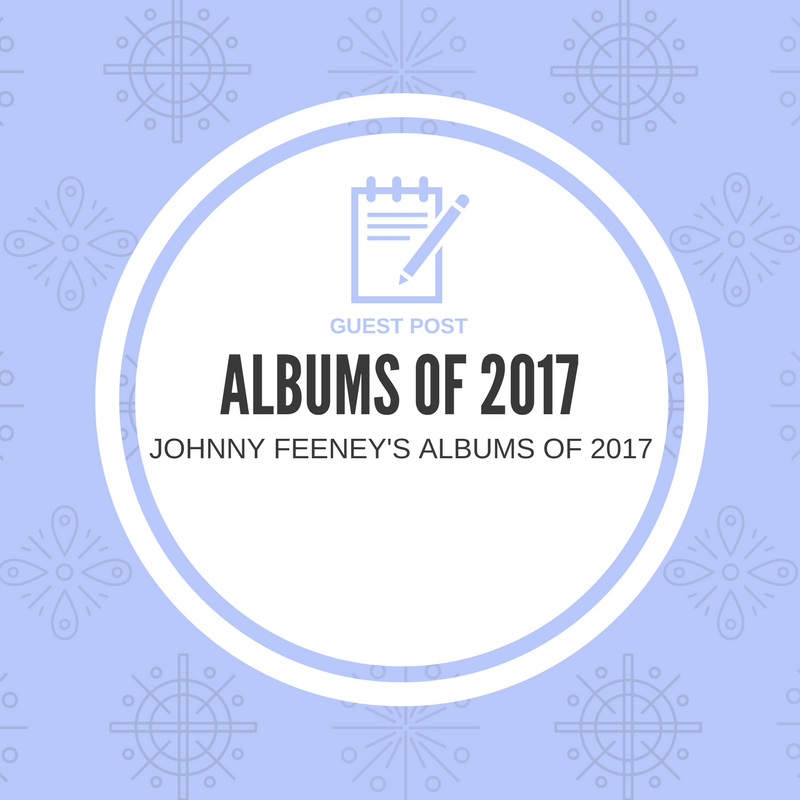 Aside from compiling my own end of year lists, I really do enjoy checking out other people’s take on the past 12 months and none more so than Mr. Johnny Feeney.

A massive thanks to Johnny for taking time out to compile this list, and on that note, I’ll leave you with his Mr. Feeney’s favourite records of 2017.

Previously split up in 2006, Grandaddy’s first album in eleven years saw the ever-eccentric, cult Californians return with a bang with their trademark, electronica-tinged alt-rock. The familiar sounds of Jason Lytle’s distinctive, melancholic vocals, chugging guitars and synth flourishes are all present and correct on a wonderful comeback album that was well worth the wait.

Dublin rockers, Fangclub, have been tearing up stages around the country and further afield for a while now and, thankfully, their self-titled debut album delivers on the promise of their raucous live shows. In a classic guitar/bass/drums set up, the trio display a keen ear for an infectious hook and make a thunderous racket not dissimilar to Nirvana. If you like it loud then look no further.

The London four-piece’s sophomore album sees a fine follow up to 2015’s commercially successful, Mercury-nominated My Love Is Cool. The adaptability of vocalist Elise Rowell means the group are equally comfortable on the melodic, anthemic indie-rock side of things (‘Beautifully Unconventional’) as they are on the heavier material (‘Yuk Foo’) and anything in between. It’s this broad range that makes Wolf Alice such an interesting proposition.

While her debut album was not without its charms, Marika Hackman’s return with I’m Not Your Man sees the English singer-songwriter step it up a few notches with the exceptional scope and quality of the songwriting. The folk tracks could compare to Laura Marling in her pomp, on the louder ones one can detect a bit of Feist (‘Time’s Been Reckless’ is a candidate for catchiest chorus of the year), while on the darker stuff there’s a distinct Warpaint vibe, most notably on the sensational ‘Gina’s World’. Although not perfect, all signs point to a very bright future for Hackman.

Australian psych-rock outfit Pond’s seventh studio album saw Tame Impala’s Kevin Parker take control on production duties. All that one could expect or hope for from such a pairing are abundant here: wonky synths, cosmic guitars, high-pitched vocals. Although the subject matter is actually on the darker side (30,000 Megatons was released the day after Trump’s victory – “We need 30,000 megatons / Push the button now”), the uplifting music more than balances out what is a very fine album.

Following up 2014’s beautiful, acoustic Morning Phase, the latest studio release from Beck is a positively buoyant affair. Highly danceable throughout and brimming with ideas, Colors sees Beck throw everything but the kitchen sink at these tracks. While the results are understandably mixed in parts, more often than not you’re left with a serious stomper of a tune such as ‘Up All Night’ or ‘I’m So Free’. And in this day and age, that’s a price worth willing to pay.

The National were never ones to veer too far from the template they’ve so successfully created over a storied career. While this may not exactly be their Kid A moment, the electronic experimentation on ‘Sleep Well Beast’, their seventh studio album, is a slightly surprising and very interesting direction. Fans needn’t worry too much however – this is still unmistakeably the sound of the National. Happily for fans, as the gorgeous ‘Carin at the Liquor Store’ proves, the band also retains the ability to write devastatingly simple but beautiful songs.

St Vincent, aka Annie Clark, is one of the most endlessly inventive and consistent artists out there at the moment. Masseduction, her fifth studio album, sees Clark move away from her usual art-rock sound over to a more challenging art-pop with stunning results. Overseen by pop producer du jour, Jack Antonoff (Taylor Swift, Pink, Lorde), the heart of this record is all about power on varying scales (sex / drugs / sadness). Along with the bouncier tracks such as ‘Young Lover’ and ‘Los Ageless’ you also get beautiful ballads such as ’New York’ and ‘Slow Disco’. Truly amazing.

2017 was a great year for shoegaze with comeback albums from two of the genre’s pioneers, Slowdive and Ride. Slowdive’s self-titled record, released in May, their first in more than 20 years, is the standout however. Packed full of swooning, shimmering soundscapes, this is the sound of a band at the top of their game and is a complete joy to listen to and get lost in. ‘Star Roving’ and ‘Sugar For The Pill’ especially are songs for the ages but there’s no weak link within here. The album flows seamlessly throughout and is certainly best consumed whole. Find a nice, quiet haven for yourself, sit back and enjoy.

The third LP from Providence, Rhode Island’s Downtown Boys is a punk-rock album brimming and bristling with an insane, invigorating energy from start to finish. Laced with politically charged content, the confrontational Victoria Ruiz’s rasping lyrics are the cornerstone around which everything else is based – the menacing basslines, the spiky guitars, the thundering drums, the wild, intermittent saxophone. While their sound is clearly influenced by late 70’s punk, it’s also reminiscent of early Pixies at their riotous best. An absolute blast of a record.