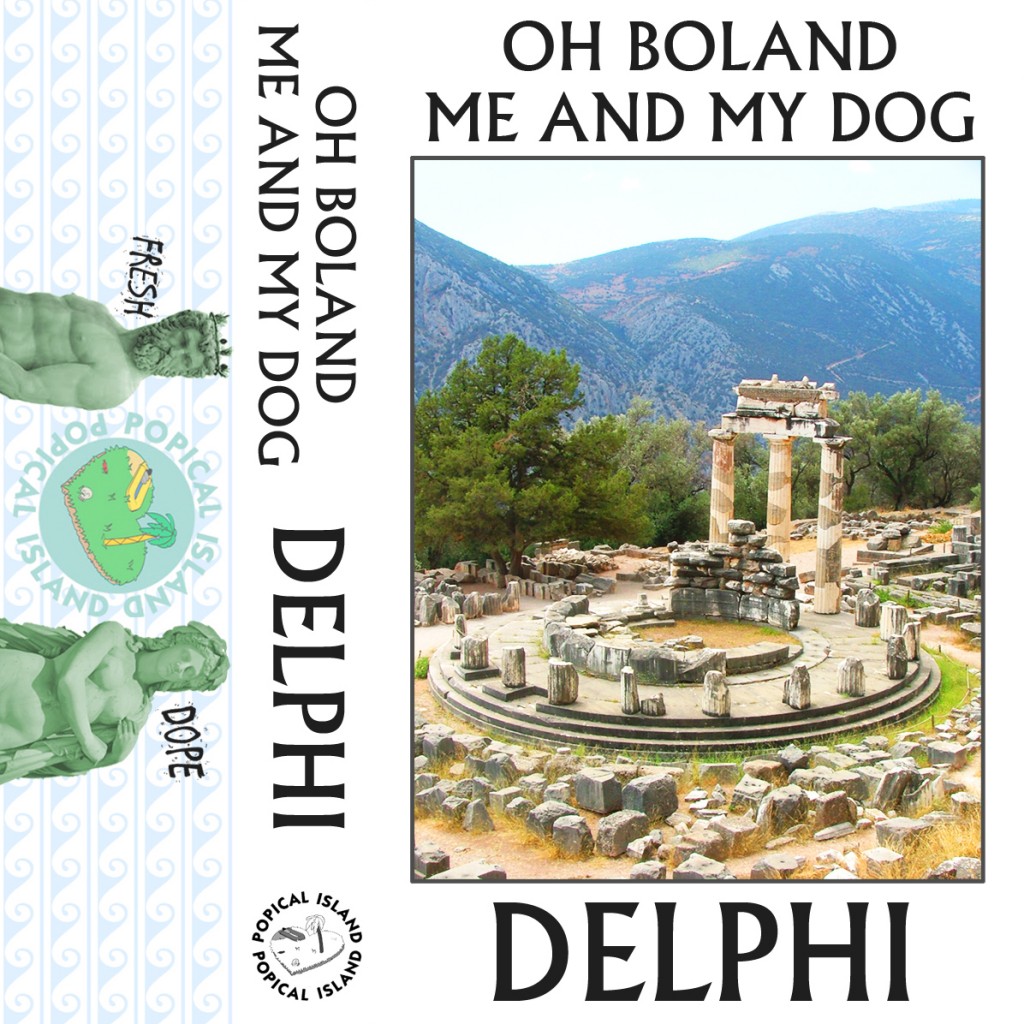 Two of the West of Ireland’s finest indie acts, Tuam’s Oh Boland and Westport’s Me & My Dog, have teamed up for a joyously raucous split release, entitled Delphi. The joint release is brought to you by Dublin-based music collective Popical Island, and comes as a limited edition cassette (and for those of you without a tape deck, as a downloaded via Bandcamp). And the result of this coming together is pretty awesome.

‘Side A’ belongs to Oh Boland and as we’ve found before, they are a band with a pretty clear idea of what their sound achieves. The Tuam trio’s rough, ragged and somewhat abrasive sound borrows from an earthy mix of garage rock, indie, pop and some local guitar flavours, to arrive at an utterly charming and lovable listening experience. From opener ‘Tidy Is’, a rollicking indie rock number with crashing drums and rumbling guitars, they’re sticking to the script set out by their two previous excellent EPs, Oh! and Ho!.  ‘Home Truths’ slows things down a notch, with an ear-catching riff , a fuzz-laden shudder and brooding vocal, they deliver an equally memorable rendition. The remaining tracks stick to a fairly similar script, in a consistent way rather than repetitive one. With every rumbling note their music proves ever more captivating and palatable, as it screeches and howls harmonically as the sheer thrashing nature rings through. Bands of this ilk are relatively rare commodity Ireland and rarely are they so utterly fuckin’ brilliant, which is all the more reason to treasure them.

Over to Side B and it is all about Westport’s Me & My Dog, who lay on us their blend of  infectious surf-pop meets blissful indie-pop, imbued with a heart-warming melodic aesthetic. From the opening sugary-sweet slice of pop that is ‘Change of Mind’, it is hard not to be entirely smitten with their infectious jangle. The rest are equally buzzing, upbeat melodic indie-pop cuts aside from say, ‘I’m Done’, which is permeated by a meandering, listless charm, demonstrating a pertinence for harmony found within their music. It is difficult to pick out any one track for singular praise, such is the consistency throughout. This is undeniable indie-pop brilliance of the highest calibre.

A very well paired dual offering from Popical Island, with two very promising bands, showing buckets potential. An absolutely cracking release filled with huge quantities of brilliance. You can try out some choice cuts below or pick it up in it’s entirety, from here.