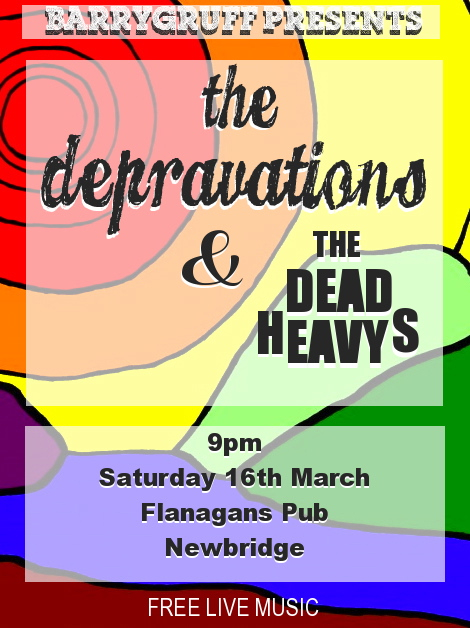 ‘BarryGruff Presents’ returns to Flanagan’s Bar for its 13th Newbridge show on Saturday, March 16th. 13, lucky for some, huh?

Over the course of the previous shows there’s been some really special nights littered with many great performances. This coming Saturday will be another top night of live music with The Depravations and The Dead Heavys.

The Depravations are Galway four-piece indie-folk band who take their influences from a combination of ’50s and ’60s surf music, old country and blues. The band went down a storm when they played late last year and return as part of their tour in support of their excellent debut album, ‘Onwards, Westwards’. The album, like their music in general, is filled with warmth, rich sounds, stories and harmonies; they are one of the West of Ireland’s hidden treasures but hopefully not for too long.

The Dead Heavys are gearing up to release their debut record, produced Jagz Kooner (Primal Scream, Kasabian & Sabres of Paradise). The Waterford bands brand of funky indie rock, tinged with psychedelics and a catchy pop sensibility, is utterly infectious. Not a surprise then that they’ve already made quite a stir. In February alone they played a sell-out show in The Village, appeared on Today FM and have been announced for a slew summer festivals. 2013 looks like being a big year for the lads from Waterford, and what’s bigger than coming to Newbridge?

It’s FREE in as usual & kicks off at 9pm. It’s going to be another great night of live music and one not to be missed. [RSVP]